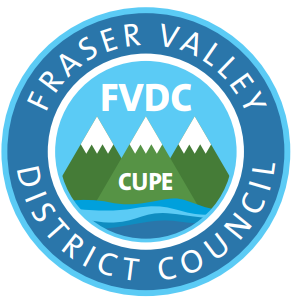 The FVDC was established September 24, 1963. The Council consists of CUPE locals in the Fraser Valley who meet together to discuss the issues important to our members, their families and surrounding communities. It consists of member locals and sub-locals who come from the Municipal, Library, Education, BC SPCA, Paramedic, Transportation and Social Service sectors, from Surrey to Boston Bar. Each local has 4 voting delegates, that attend approximately nine (9) meetings per year.

How is the District Council Organized?

The Council maintains a group of elected officers and delegates. Executive positions carry two-year terms. The remainder of the FVDC consists of delegates representing their respective locals. While the Executive have prescribed responsibilities, the entire body of delegates is accountable in helping make the FVDC a successful enterprise.

CUPE is the largest public sector union in Canada with almost 700.000 members nation-wide. There are almost 89,000 CUPE members in BC; the FVDC represents over 9,000 members in the Fraser Valley alone!

For the FVDC to be successful delegates need to attend meetings. With a maximum of nine (9) meetings per year, it is important as leaders to draw together and discuss the issues important to CUPE members, their families, and respective communities.

What is the mandate of the FVDC?

Perhaps the most important aspect of the FVDC is networking. When FVDC affiliates meet for educational courses, events, or regular monthly meetings they have the opportunity to exchange information about issues that affect working people. The FVDC enables CUPE members in big and small locals to share common problems and interests.

The FVDC is proud to sponsor various non-profit organizations and charities throughout the Fraser Valley.

Committees are integral to how CUPE members in BC take action.  CUPE BC Committees meet 2 to 4 times during their 2-year term in addition to attending the One Big Committee Meeting to coordinate their plans for the coming two years with the CUPE BC Action Plan and resolutions from convention.

CUPE BC Committees are selected by the CUPE BC Executive Board after Convention in odd-numbered years. All costs incurred (travel, meals, book-off, accommodations) in order to participate in CUPE BC committees are reimbursed to the local or member in accordance with the CUPE BC Expense Policy.

In order to be considered for a Fraser Valley District Council endorsement to a CUPE BC committee, a member must be a sworn delegate of a FVDC affiliated local, must have attended FVDC General Membership Meetings in the year of selection and must request endorsement in writing to cupe.fvdc@gmail.com.

All locals of the Canadian Union of Public Employees in the Fraser Valley (Surrey to Boston Bar) are welcome and encouraged to affiliate with Fraser Valley District Council. FVDC is chartered under CUPE National.

While each affiliated local is permitted 4 voting delegates to FVDC, there is no limit to the number of guest members that can attend FVDC meetings from each local.  The connections and wealth of information brought to each meeting by delegates and guests from all the affiliated locals is invaluable to any member who chooses to attend. Each local is given the opportunity to share things that are happening in their locals and ask for advice or assistance from other members in attendance.

Fraser Valley District Council hosts a number of low-cost educational opportunities for our affiliates each year in the Abbotsford Area Office. Affiliates are encouraged to request educational opportunities through FVDC.  Workshops are offered to our affiliates at the reduced rate of $15 per member per workshop. This, combined with lower mileage than travelling to Vancouver etc, offers our affiliate locals a lower cost option to train their general and executive members while still receiving the caliber of education offered by CUPE National.

Guest Speakers often attend Fraser Valley District Council meetings. This gives our affiliates access to presentations they may otherwise not have an opportunity to attend. It is not unusual for elected officers from CUPE BC or representatives from CUPE National in attendance at FVDC Meetings. This gives affiliated delegates a chance to meet and network directly with officials from the provincial and national umbrellas of our union.

FVDC members participate in the action plan of CUPE National and CUPE BC.  Resolutions endorsed by FVDC sometimes have an increased chance of being debated on the Convention Floor. Additionally, Committee Representatives to provincial and national committees have the power to make recommendations to the executive boards of our provincial and national union. Affiliate delegates may apply to FVDC for an endorsement to a CUPE BC Committee of their choice, exponentially increasing their chance of being selected to that committee. Finally, delegates to FVDC have historically been elected the Regional and Alternate Regional Vice-Presidents to the CUPE BC Executive Board for the Fraser Valley. Committee Reps and the RVP reports to the membership at each Fraser Valley District Council Meeting.

FVDC meetings are also a source of information on upcoming events in the labour movement. The more engaged an affiliate local choses to be with FVDC, the more enriching and rewarding their affiliation will be.

Not affiliated?  Join the Council HERE

There are no upcoming events.

CUPE members in the Fraser Valley are encouraged to join our Facebook group.